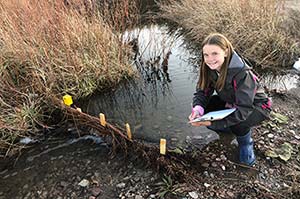 For the first time ever, a Wyoming student is among 30 nationwide finalists in the Broadcom MASTERS, the nation’s premier STEM (science, technology, engineering and mathematics) competition for middle school students.

Carey Junior High School (Cheyenne) eighth grader Shelby Hoobler is the only Wyoming student to advance in the prestigious competition. Her project, titled “Leave It to Beaver Dam Analogs … to Change Soil Moisture,” debuted at last March’s Wyoming State Science Fair (WSSF), held at the University of Wyoming. She competed in the Earth and Environmental Sciences category.

The Broadcom MASTERS program seeks to inspire young scientists, engineers and innovators to solve the grand challenges of the 21st century. The 30 finalists will now compete for more than $100,000 in awards. As a finalist, Hoobler received a $500 cash prize. She will showcase her project next month in a virtual program with the other finalists.

Of the 30 finalists, eight are from California, and just three represent Rocky Mountain states: Hoobler and two students from Utah. Hoobler is among 14 females selected as finalists.

“I feel really excited, and I’m honored, because a lot of the projects I saw throughout the many science fairs I competed at were awesome experiments,” Hoobler says. “I feel proud to represent my family, Carey Junior High School and Wyoming in this competition.”

The WSSF, an outreach program at UW since 1998, opens otherwise inaccessible opportunities to Wyoming middle and high school students.

“Shelby is setting the bar for student science fair research in Wyoming,” says Erin Stoesz, the WSSF director and an assistant lecturer in UW’s Science and Math Teaching Center. “I am proud that she is doing this while staying true to her western background and interests in Wyoming’s environment and ranching.”

For her project conducted last year as a seventh grader, Hoobler says beavers build dams to back up water where they live. In the process, they can alter the landscape, which causes more moisture to build up in nearby soils. Hoobler wondered whether a similar concept might help at a stream near her home.

That stream, Dry Creek, has been subject to erosion and other degradation. As those things happen, the ratio of deeper to shallower areas change, and the water table can drop, Hoobler says. Wetlands near the banks can dry out, and the impacts can harm biological communities. Sensitive aquatic species are particularly at risk, she notes. Unless something is done, Hoobler says, harmful impacts at Dry Creek will worsen as Cheyenne continues to grow.

“I know I can learn about science while also helping out my community with stream restoration,” Hoobler says. “It means to me, that if I want to go out and do something, that if I put a lot of effort in that, I can do it.”

Last year, Hoobler worked with Laramie County Conservation District personnel to survey the Dry Creek stream channel. The data showed places where the water table had dropped below its former streambed, and it showed where a pool-riffle sequence — a deeper area before a shallower one — might help with restoration.

Based on the data, Hoobler chose five spots for “beaver dam analogs.” She collected baseline data on soil moisture at those spots, building five artificial beaver dams at those places. She hammered wooden stakes into the stream channel across its width, weaved willow shoots among them and filled in any leaks with rocks and moss. Hoobler visited the dams five times from October through November and measured the soil moisture in multiple spots near each of her dams.

“The data showed the soil moisture percentages increased an average of 4 percent to 45 percent” for the area around each beaver dam analog, she says. Hoobler has left her structures in place so she can see how they help the channel and vegetation over time.

Not yet entering high school, Hoobler says she aspires to be a biologist or a rancher, and wants to learn more about Wyoming’s environment.

“If I can understand the balance between land uses and nature, then I can be successful in ranching while taking care of my ranch,” she says.

Two other Cowboy State students — Asriyah Islam and Padmalakshmi Ramesh — from last March’s WSSF were among the top 300 accepted applicants of Broadcom MASTERS. Both are now eighth graders at Laramie Middle School.

Awards for the Broadcom MASTERS competition were made through the Society for Science & the Public’s partnership with the U.S. Department of Defense as a member of the Defense STEM Education Consortium.

For more information about Broadcom MASTERS, go to www.societyforscience.org/broadcom-masters.

For students interested in more information about the WSSF, go to www.uwyo.edu/sciencefair or email Stoesz at wyostatefair@gmail.com.