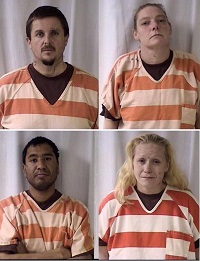 The Cheyenne Police Department arrested four people last night in connection with the death of 48-year-old Anthony Hayward, of Cheyenne.

Cheyenne Police were called to the Big Horn Motel located at 2004 E. Lincolnway on December 7 at 4 p.m. for a suspicious death. Officers arrived on scene and found Hayward dead. An autopsy was performed in Loveland, Colo. on December 8 where it was determined Hayward died of asphyxiation.

During the investigation, Cheyenne Police Detectives identified several suspects in the case and were able to locate them the night of December 9.

Bowen, Brewer, Miller, and Ontiveros were arrested and booked into the Laramie County Detention Facility on First Degree Murder charges.

This case remains under investigation by the Cheyenne Police Department.