The University of Wyoming Cowgirl volleyball team was picked to finish fourth in the Mountain West Preseason Coaches’ Poll, the league announced Thursday.

Additionally on Thursday, senior outside hitter Bridget Shanahan was named to the All-MW Preseason Team. Shanahan earned All-MW for the first time a year ago and is one of the top returning hitters in the league after she finished third in the MW in kills averaging 3.33 kills per set.

UW returns nine letterwinners including six starters from last year’s team that finished 23-8 overall and 12-6 in the MW. Also back are three redshirts along with four incoming freshmen. In MW matches last season, junior middle blocker Laura Beach finished third in hitting percentage to earn All-MW honors, while junior setter Courtney Chacon finished seventh in assists and senior Allison Waldvogel was second in digs per set with 4.18 during MW play.

Wyoming gets its 2015 season underway next week when it hosts The Rumble in the Rockies. The Cowgirls open the campaign against No. 14 Ohio State on Friday, Aug. 28, at 6:30 p.m. (MT) in the Arena-Auditorium. They will then take on South Dakota and Butler the following day at 11:30 a.m., and 7 p.m., respectively.

The Cowgirls will host Pistol Pete’s Showdown: Presented by UniWyo Federal Credit Union, Sept. 11-12, where UW will welcome three teams that made last year’s NCAA tournament in Marquette, Kansas and Northern Colorado. The final tune-up before MW play is the Wyoming Invite, Sept. 17-18, as Idaho State, McNeese State and Pepperdine come to Laramie.

The first weekend of MW matches will be at home on Thursday, Sept. 24 against Boise State and against Utah State on Saturday, Sept. 26. The final regular season matchup at home for the Cowgirls will be against Border War rival Colorado State on Tuesday, Nov. 24. 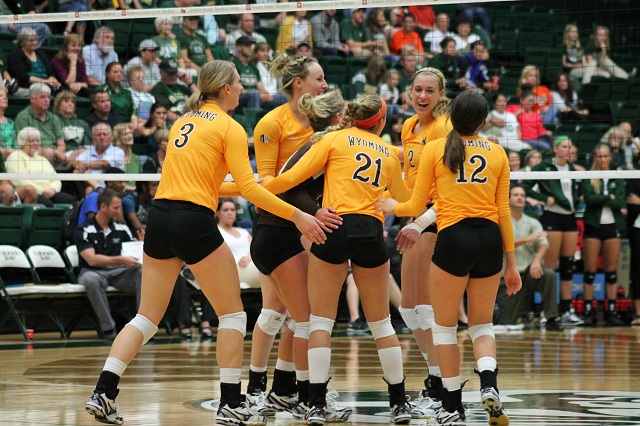